The production stage of the hardware product development cycle is an exciting one: you are finally manufacturing your product at scale so that it can be enjoyed by your customers. For climatetech innovators, the reward is amplified by the positive impact that your product will make on the planet.

In order to begin producing your climatetech hardware at scale, you must complete the following prototype levels first, as outlined in the Prototype Stage article:

The US Department of Defense (DOD) has developed a rigorous and comprehensive assessment of Manufacturing Readiness Level (MRL) in 22 different areas (sub-threads) of product and business development. The DOD’s MRL framework is so valuable that Scale For ClimateTech has adopted it as a guide to help our hardware companies advance their manufacturing readiness. Our program can guide you through the DOD’s MRL assessment process step-by-step, or you may complete an MRL assessment on your own. It will give you a complete picture of the work needed to be done before your product can be truly manufacturing-ready. For more information on the MRL process and to complete an MRL self-assessment, visit dodmrl.com.

Our 10-minute Product Stage Assessment can also approximate your MRL, and it works well as a stepping stone to the full DOD MRL assessment. If your product requires electronics manufacturing, we also recommend completing our separate Electronics Manufacturing Readiness Assessment.

Suppliers (aka. vendors) are entities that provide finished products, parts, or materials. Manufacturers, distributors, and wholesalers are all suppliers. For more information on finding the right suppliers for your product, we recommend reading this article from Shopify.

Establishing a robust supply chain is one of the most important things that you can do to increase your chances of success as a hardware company. Some general guidelines for lowering your supply chain risks include:

Visit our resources page for checklists to help you prepare for supplier meetings and templates for a full Supply Chain Risk Assessment and Supplier Basic Performance Audit.

Our partners at Partsimony can also help you with supply chain management. (Tell them we sent you!)

As an early-stage company, you need to prepare yourself for the fact that some manufacturers will not be willing to work with companies of your size and stage. Some manufacturers work with large order quantities and Fortune 500 companies exclusively, whereas others recognize the potential value in working with startup companies. Scale For ClimateTech can make introductions to such founder-friendly manufacturers for you. It’s important to find manufacturing partners who are appropriate for your company’s stage.

For more information on these topics, read our guide on Engineering & Assembly Drawings, Bill of Process (BOP) & Bill of Materials (BOM).

We also have guides on Preparing for Manufacturer Pricing Discussions and Maximizing Manufacturing Tours, as well as a calculator for Rating Contract Manufacturers.

Scaling up your production will also require you to scale up your workforce. To help you with this, we have created an Employee Handbook template for you to edit and distribute to new team members.

In order to begin low-rate production, you must first verify your manufacturing processes on a pilot line. (For more information on pilot lines, see our Prototype Stage article.) Your product’s design should also be “frozen” at this point (ie. you have committed to the design and plan to change it as little as possible). Remember – any product design changes that take place from this point forward will be expensive!

By the time you reach full-rate production, your manufacturing processes should be stable and your low-rate production goals should have been achieved (eg. quality, cost, schedule, and performance goals).

Full-rate production is also the stage when you should begin to put Lean & Six Sigma Processes into place, if you haven’t already. For more on this topic, consult our guide on Lean Principles & Implementation and our Lean Kaizen Project Management template.

In the Idea Stage article, we covered the basics for ensuring that your climatetech hardware product idea will be viable in the marketplace. We then discussed the process of turning that idea into a functional product that your customers will love in the Prototype Stage article. Lastly, in this article we introduced the fundamental concepts involved in scaling your production from a handful of units to full production runs.

The key to achieving mass production of your product is that you (very likely) cannot do it on your own. Establishing a robust supply chain and long-term relationships with partners who are well-suited for the stage and size of your business will increase your chances of success.

If you’re a climatetech entrepreneur who would like to be introduced to the New York State hardware manufacturing ecosystem, Scale For ClimateTech would love to help you. Our free program can help connect you with contract manufacturers that are experienced in working with early-stage companies. If you’d like to stay in the loop about our future offerings and be the first to know when our annual application period opens, please subscribe to our newsletter.

Best of luck on your manufacturing journey!

Get introductions to contract manufacturers with 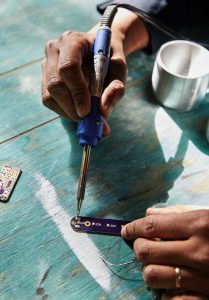 Prototyping is an essential process that every product must go through before it can be available on the market. If you’re developing prototypes for a new climatetech product, this guide can serve as a framework to help you advance it to the production stage. While there is no one “right” way to develop a prototype, we recommend following the steps outlined in this article in the order they’re listed.

Before you begin prototyping, you should make sure to complete the following steps, as described in the Idea Stage article:

If you have already begun prototyping but are unsure which prototype stage you are at, our Product Stage Assessment can estimate your product, prototype, and testing stage for you. It also provides you with a personal product roadmap tool to monitor your product development progress over time.

Prototyping is the iterative process of building preliminary products or parts of products to test their design, functionality, usability, and satisfaction of customer requirements. Each prototype should be thought of as an experiment. Every time you build a prototype, you should have a clear hypothesis that you are testing, as you did during customer discovery. Building prototypes and putting them in the hands of your customers early and often is the best way to ensure that your end product will meet their expectations.

As you read through the typical progression of prototype levels outlined below, keep in mind that prototyping is not usually a linear process. The steps below represent the most direct path to production, but it’s very likely you will need to iterate on multiple prototypes at each step – or go back and repeat steps – and this is okay! It’s better to spend time testing multiple prototypes to make sure you are building something that your customers want to buy, rather than rushing an uncertain design to production.

The first hardware prototype that is typically built is called a Pre-Alpha Prototype, Minimum Viable Product (MVP), or a Proof-of-Concept Prototype. This early stage of prototype development may be referred to as the “research,” “benchtop,” or “lab” stage. In the Scale For ClimateTech program, we refer to prototypes at this stage as Pre-Engineering Prototypes (or Pre-EPs for short).

No matter which name you choose to describe it, prototypes built at this stage all have a common goal: testing and validating the core or “killer” assumptions of the hardware device. As the name “proof-of-concept” implies, you are testing the basic concept of your product. The name “Minimum Viable Product” is also apt because you are developing a prototype with the minimum features necessary to prove whether your product can provide value in the marketplace.

You can test your product’s concept by:

The results of these tests will help you decide whether to proceed to the next prototype stage, or to iterate and adjust your product concept. 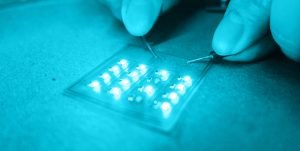 If you have completed the steps above and have gathered initial evidence that your product concept can work and will provide value to your target customer, then you can proceed to the Alpha Prototype stage. Alpha prototypes are primarily used for internal testing, but they can still be shown to your customers to receive their feedback.

In the Scale For ClimateTech program, we refer to alpha prototypes as Engineering Prototypes (EPs).

An Engineering Prototype is a single looks-like & works-like prototype resembling the full product. It should be an assembly of all your product’s systems. At this stage, your customer requirements should also be validated.

An Engineering Validation Test Prototype is the first build of multiple units with production-quality tooling. As the name implies, the product’s engineering is tested at this phase to validate that it satisfies the product specifications including quality. It’s necessary to build and test multiple units at this stage in order to have a statistically significant sample size.

The purpose of a Pilot Prototype is to test the manufacturing processes for your product. At this stage, you have completed your first official production run at a relevant quantity (~5-10% of a full production run). In the Scale For ClimateTech program, we call pilot prototypes Production Validation Test (PVT) prototypes.

To be considered PVT Prototypes, your units must meet the previously-defined requirements to be saleable to customers. At this point, you should also have quality, packaging, and shipping processes in place.

The prototyping process can sometimes feel like a long and winding road with many iterations and pivots along the way, but remember that these changes are much less expensive to complete up front than after you have started manufacturing at scale. Each prototype brings a new learning opportunity, and you should try to learn as much from each one as you can while the cost of making changes to your product remains low.

Next Up: Low-rate and Full-rate Production

If you have completed all of the prototype stages above, validated that your product meets the customer requirements and technical specifications, and you have successfully tested your manufacturing processes, you are ready to begin low-rate production. We will discuss the production stage, including how to manage interactions with manufacturers and suppliers, in the next article.

Would you like help navigating the journey from prototype to production? If you’re a climatetech innovator, Scale For ClimateTech can provide expert guidance through this process.

Get help navigating from prototype to production with